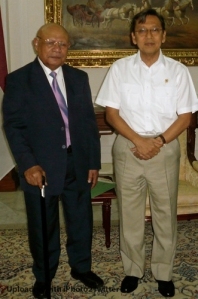 “I and my associates are ready to work with the government to develop Papua province,” Jouwe said here on Monday after a meeting with Coordinating Minister for People`s Welfare Agung Laksono.

But Jouwe who is a member of the supervisory council of the Independent Group Supporting Special Autonomy for Papua within the Republic of Indonesia (IGSSARPRI) also said the government should evaluate its special autonomy policy on Papua province.

“The government`s budget for the implementation of special autonomy in Papua province is quite large. It is hard to believe that the budget funds made available are not enough to develop Papua,” Jouwe said in a written recommendation.

Jouwe who had for the past 40 years lived in the Netherlands said the government should strictly supervise the use of state budget funds allocated to Papua, and investigate those suspected of corrupting the money.

He also urged the government to widen the local people`s access to banks and medical services.

“What is also needed now is a meeting between the government and prominent Papua figures to discuss plans to develop Papua,” he said. (*)

WEST PAPUA Nicolaas Jouwe: I am ready to work with the government to develop Papua province
%d bloggers like this: